2010 … that still sounds like science-fiction to me, guess I’ll have to get used to living in the future.
Well, I guess you wonder what I have been doing since August. I’ll recap the last few months in a few words and photos:

My grandma turned 90 this year and as the years before we celebrated at my parents place in Spain. We went out for a very yummy lunch. Because I saw some Indian dishes on the menu, I asked the waiter about it and it turned out, that the chef is actually from india. So my grandma and I ordered curry dishes, while my parents went for Mediterranean fish.
The afternoon we spent together. I had prepared a little speech, recapitulating the years of her life. In order to prepare myself, I created a over 2 meters long time line, with all major events from our lifes and history. It is quite amazing how much can be packed into a single lifespan! In the evening we surprised her a little more by lighting a 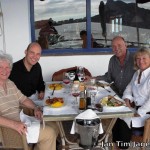 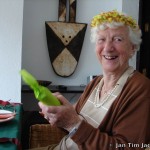 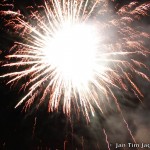 Towards the end of the year, there was the Christmas party of our institute. Every year the whole scientific staff spends a whole day together, visiting an interesting industry partner or some other entertaining venue. This year the organisers chose the ZKM | Center for Art and Media in Karlsruhe which showed a very interesting exhibition, mixing technology of the past century with artistic aspects.
After the exhibition and a brief visit at the Christmas Market in Karlsruhe (where we had some local food and mulled wine), we went back to Darmstadt. At a local restaurant (3klang) we met with former colleagues and enjoyed a very tasty dinner while our professor recapitulated the past year, highlighting the achievements. 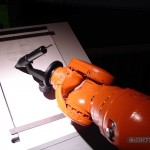 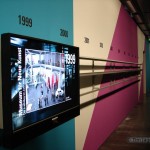 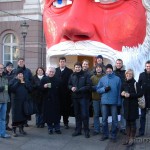 The holidays around Christmas I spent back at my home town Filderstadt with my family. I always enjoy seeing them, as we usually don’t meet too often over the year. The days were filled with tasty meals and nice talks in front of the fireplace (which we didn’t light, as it was warm enough and the fire light usually gets everyone tired 😀 ).
After the holidays I returned back to Darmstadt. The next day I picked up two friends and we drove to Berlin where we met up with some more friends to stay at a flat which yet another friend had left to us for the days around new years eve. In the capital, we went to a very interesting photo exhibition about the work of Don McCullin at the C/O Berlin, ate at a sweet little Italian place in Berlin Mitte and celebrated new years eve with a big crowd of CouchSurfers at Hostel/Bar/Club Belushi’s. 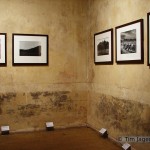 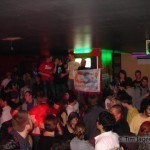 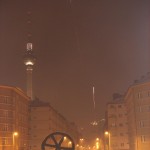 The day before my birthday, there was the official handover of our diploma documents. So I left work a bit earlier that Friday and headed down to Stuttgart. After some speaches, during which Martin and I took the small quadrocopter out for a flight, all the former students gathered at the front of one of the auditoriums and got their documents handed over.Â  Afterwards there was a small barbecue party in front of one of the institutes.
Once this sort of official part was over, people started moving into the city to celebrate, which for me coincided with my 28th birthday as well. As many people came to Stuttgart for this event we were quite large group and partied at various locations (Palast, Schocken, Oblomow, etc.).

The next afternoon, Martin and I met at the beergarden in Leinfelden. After a laid back late brunch we went to Vaihing to get drinks for the party at Flowrider’s garden that night. At the mall we stumbled into a store selling nonsense gadgets like Hawaii flower garlands and soap bubble toys, of course we couldn’t resist and bought a bunch of the garlands and bubble toys for the party.
As things already got late, we drove straight to Flowrider’s party in the fields behind Vaihingen. The usual crowd barbecued and partied all night, getting eaten alive by the mosquitoes from the nearby pond.

This will be the last posting from Filderstadt in a while. Tomorrow I will be moving to Darmstadt where a PhD-Student position is waiting for me at the TU-Darmstadt.

All my boxes are packed and tomorrow I’ll be ready to go!

Two weeks compressed Germany
After 26hrs from door to door, I arrived back home on my fathers 60th birthday! Feeling a little weird in my own room after 4 months, I unpacked and made myself comfy. The day we had a really nice relaxed family birthday, joining around the presents. The next weeks should be busier!
Briefly: Do:concert in Stuggi, two great local musicians (Stefan Hiss & Ralf Groher) Fr: Drehbar with Holger & GF and John, afterwards big party at the Tennishouse, meeting LOTs of friends. got home around 6. Sa: hangover, leaving for Esslingen, where the big BD-party will take place, ppl show up around 1900, taking fotos, telling my stories a thousand times, getting amazed by the great plays. A really busy evening. My dad, mum and friends danced mith live music till 2! So: brunch with the guests from further away, preparing my stuff for Hamburg in the afternoon, jumping on my plane in the evening, resting in the jouthhostel in Hamburg. Mo: Spent all the day with my granny! Talking all the time, just with short breaks for lots of good food(porree-pampe 😉 thumb-up!)! It’s so nice every time again! In the evening I met Chryschdl and Tilli at the Reeperbahn, where we had some beers and good engineering talks 🙂 Tu: Walking around Hamurg inner city, working on BETPAT a couple of hours in a nice cafe. Meeting Chryschdl again in the evening. After some confusion we ended up at some liveconcert with more experimental ambient music, really weird stuff. We: leaving for Stuggi. Feeling a little ill, I stayed home the next days. Sa: Vienna, walking around the city in my typical chaotic way, enjoying nice cafes. Little tired in the evening I stayed in the Hotel and got me some Club-Sandwich by the roomservice. Su: Flight to Kuala Lumpur
Kuala Lumpur
Arriving in KL at 6 in the morning I got me a cheap cab to the hostel where I had a reservation for a room. Surviving the crazy cab-ride, I faced some confusion about my e-mail reservation. But everything went out well and I got a nice single room for about 6 EUR a night! Sleeping all day. In the evening a walked through chinatown around the corner. Coming home I just asked some guy (Owen from Melbourne) sitting in the lobby where he got his power adaptor. Beeing openminded travellers we ended up drinking way to much beer till 5 in the morning 😉 He was working on a malaysian cookbook, with lots of nice pictures and an attached CD with the sounds of the country. Nice idea!
The next day I spent the evening with another group in the backpacker, as Owen was still working on his hangover ;-). Sitting in the comfy lobby we watched some musicviedos from the laptop. Afterwards Kristi (a photographer) asked to have some walk outside, so four of us went to the reggae bar I discovered the day before. Arriving at there three were left and after another hlf an hour only me and Kristi were left. We talked till the bar closed, talked on in the lobby till late …
The next days we sticked together, doing some touristy stuff like visiting the twintowers, having a view from the TV/Radio tower, went to the zoo and some nice temples. The evenings we spent with the crowd in the lobby, going out for some beer, a indian show-dance or a transvestite show.
In the end it was kinda hard to leave, but we had more like opposite directions. She just left Sydney (after living there for 4 years, so we lived some months aside each other without knowing!), taking the long way home to Atlanta.